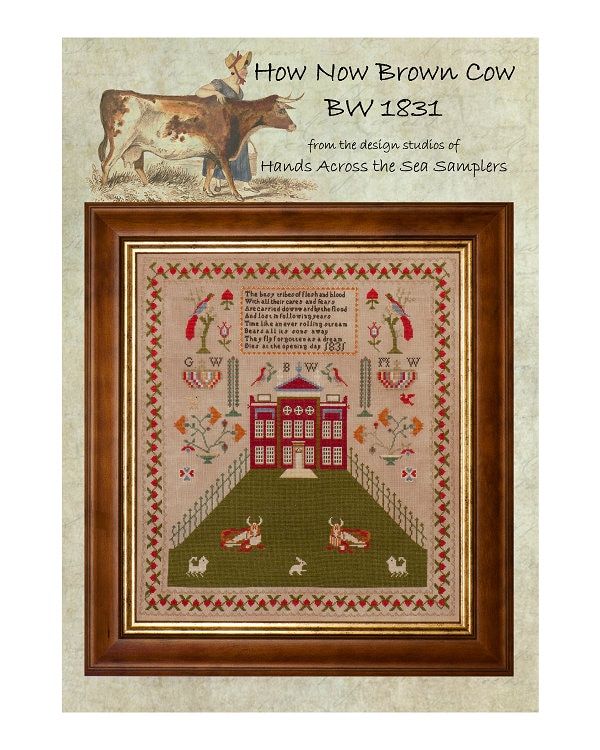 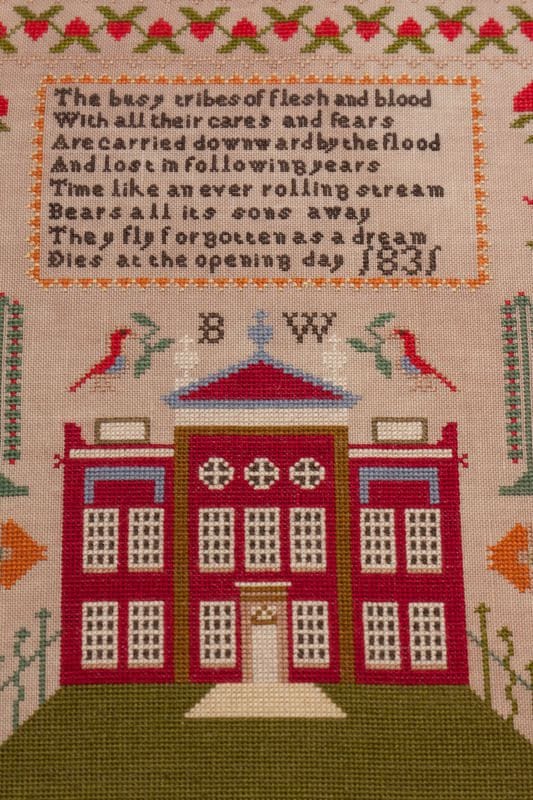 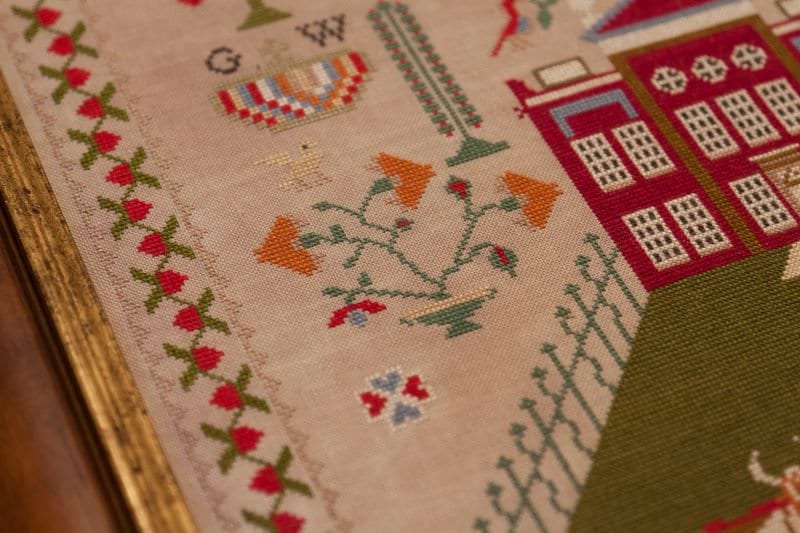 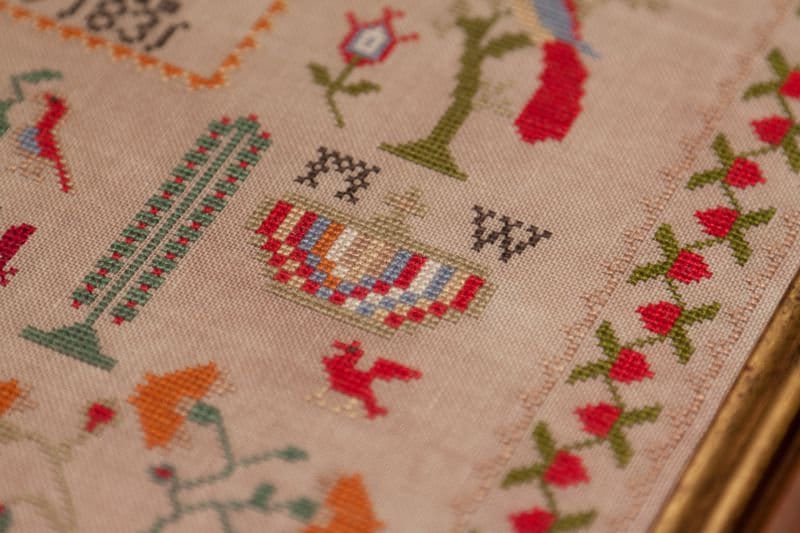 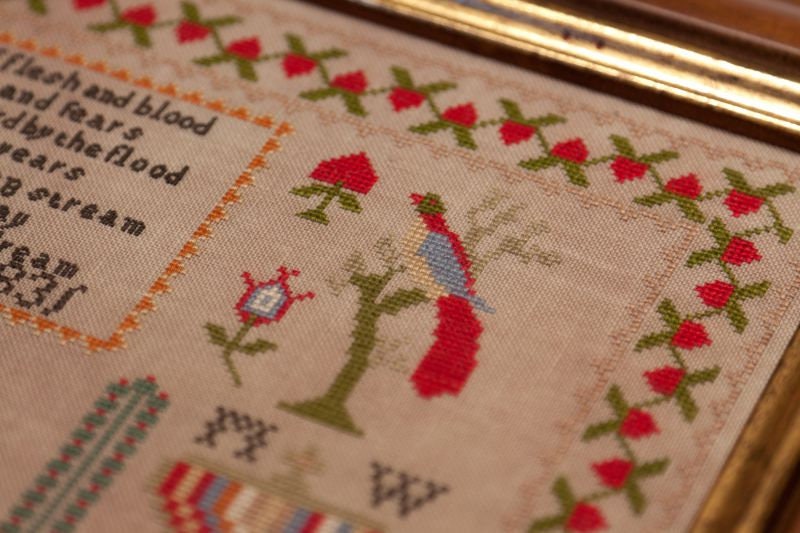 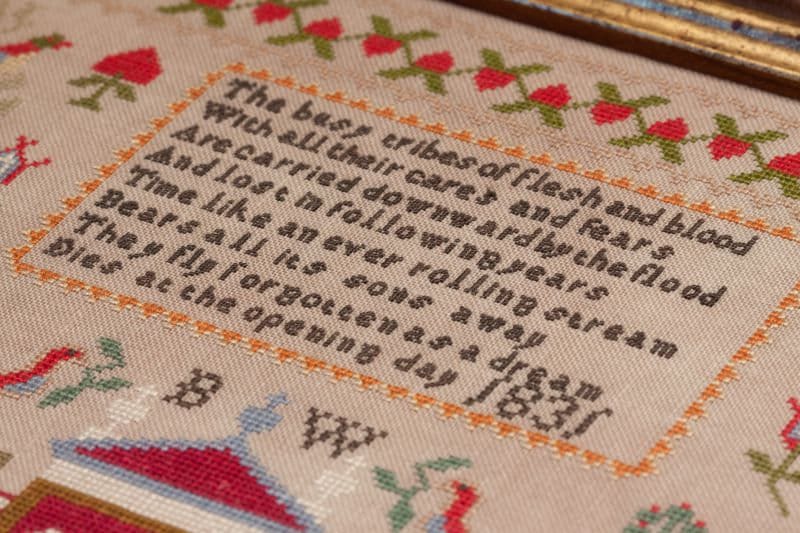 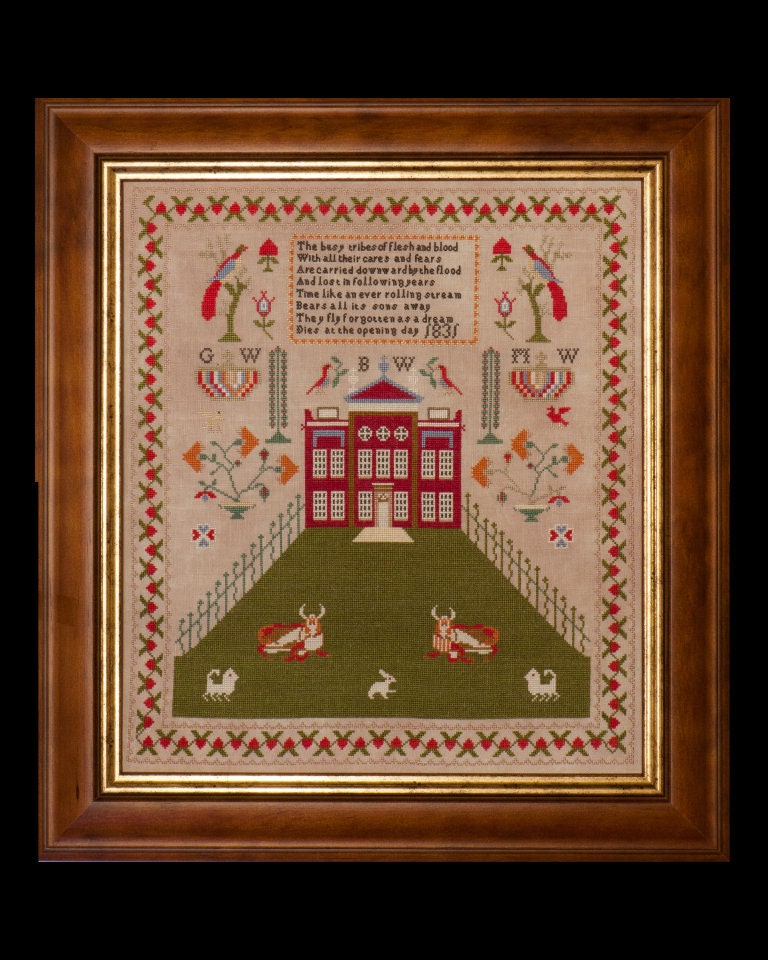 How Now Brown Cow – BW 1831 is rated as suitable for a beginner.

With a stitch count of 254 stitches (w) x 273 stitches (h) the sampler is stitched with cross stitch over 2 and the verse over 1.

Who was BW? Sadly we shall never know who stitched this charming English sampler in 1831 during the reign of William IV.

We know there are at least another eight similar samplers that make us wonder if they were stitched at the same school or taught by the same school mistress. The samplers are different in their own right, but they share the same red brick stately Georgian building together with a fenced sweeping lawn or surrounded by a grove of trees. All have at least one cow lazing on the grass, except one which is from an earlier period.

BW’s sampler is surrounded by a delightful border of strawberries, and the birds with bright plumage reflect the English fascination with exotic plants and animals resting in trees and urns of flowering carnations. Two further sets of initials “G.W” and “M.W” have been stitched either side of the house, possibly her parents or siblings.

The verse is from the Hymn “Our God, Our Help In Ages Past” written by Isaac Watts in 1708 which has been sung so often on great public occasions – the Funeral of King Edward VII; the unveiling of the Queen Victoria Memorial in front of Buckingham Palace; on board HMS Prince of Wales in 1941 at a religious service attended by Winston Churchill and Franklin Delano Roosevelt as part of a conference creating the Atlantic Charter; at Winston Churchill’s Funeral; and in 2016 it was the Processional Hymn at the funeral of US Supreme Court Justice Antonin Scalia. It is known as “The Church’s National Anthem” and is a paraphrase of Psalm 90 – A Prayer of Moses the man of God. What is interesting is in 1738 John Wesley changed the wording from “O God, Our Help in Ages Past” in the Wesleyan Hymn Book and switched these two particular paragraphs around.

In the foreground two resting cows watch 2 small dogs and a mischievous rabbit frolicking in the grass. It is from these two cows that BW’s sampler became fondly known to us as “How Now Brown Cow” which is a phrase used in elocution teaching to demonstrate the rounded vowel sounds.

The dogs featured in the sampler could be Lancashire Heelers which is a small breed of dog developed for use as a drover and herder of cattle.
**Unless otherwise stated all fabric is sold in 1/2 yard increments. If you need a longer length, just order multiple units at checkout.
e.g. If you want 2 yards just select "4" in the quantity box.