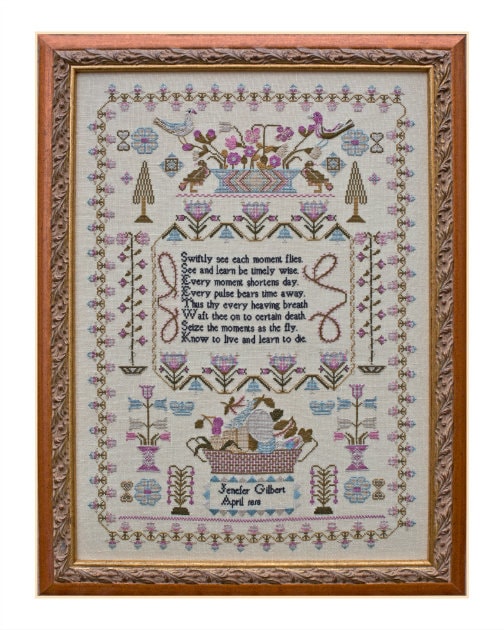 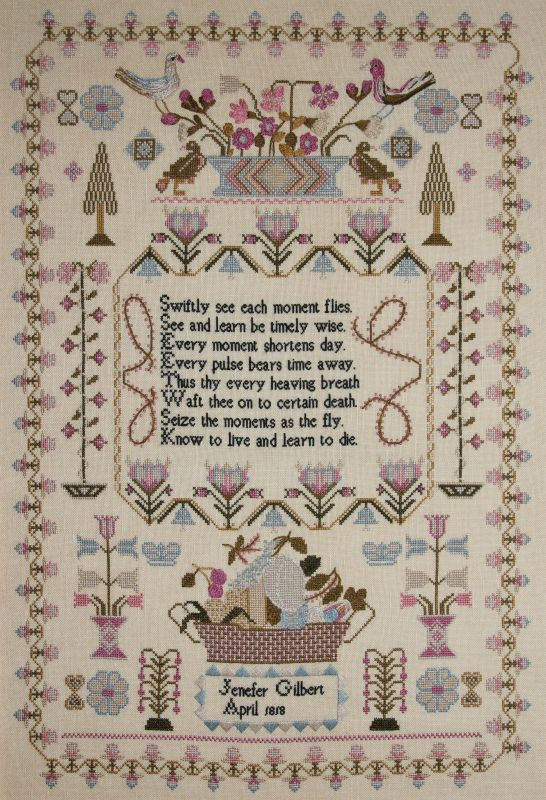 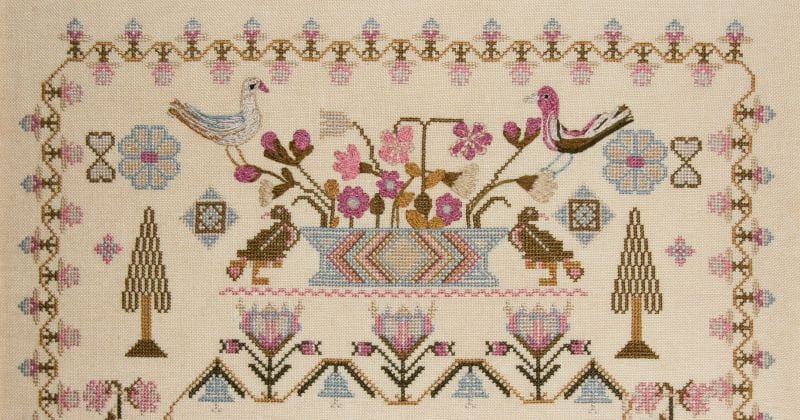 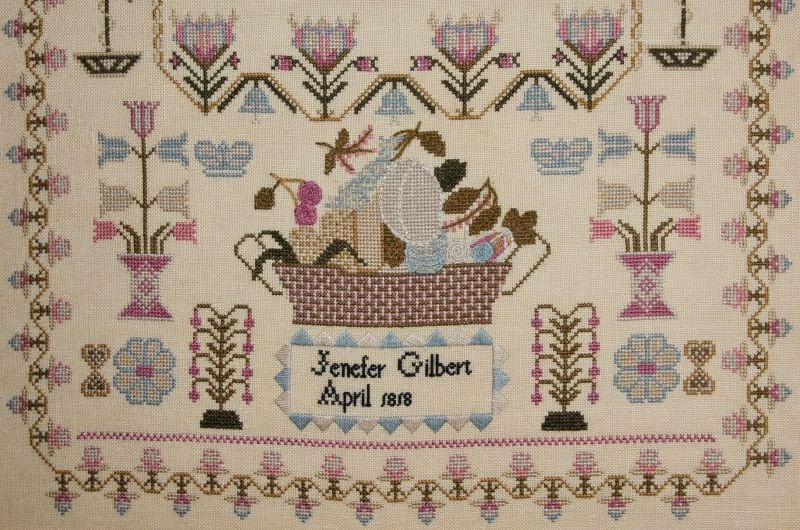 Jenefer Gilbert was born in the parish of Lanreath, in South-east Cornwall, a short distance from the beautiful coast line and picturesque fishing ports of Fowey, Polperro and Looe. The parish, which was mentioned in the Domesday Book is, even today, almost entirely rural and consists of scattered farms, one hamlet, Bocadda, and the small village of Lanreath. Jenefer was the oldest of 6 children born to Richard and Grace Gilbert. She was christened on 22 July 1806. Her family were farmers and had three farms, Trecan, Higher Brazemoor and Ven. Jenefer never married or had children, sadly dying when only twenty-five in 1830. Jenefer finished her sampler in April 1818 when she was twelve.

Contained within the pretty clover border are birds, trees, hearts, crowns and an abundance of flowers. The sampler’s stunning colour scheme has been inspired by the wildflowers that grow in profusion on the moors, meadows, hedgerows and cliffs of Cornwall.

Two distinctive baskets of flowers and fruit are the highlight of this beautiful sampler. We know of one other sampler that features both of these baskets. That sampler was completed in the same year as Jenefer’s by Ann Toms. Ann was born in the neighbouring parish of Duloe. It is highly likely that Ann and Jenefer attended the same school and stitched their samplers together.

See and learn be timely wise,

Every pulse bears time away,

Thus thy every heaving breath

Waft thee on to certain death,

Seize the moments as the fly,

Know to live and learn to die.

The verse Jenefer chose for her sampler appeared in various publications of the time including a “Selection of Poems” for “schools and young persons” collated and published by Joseph Cottle. The verse was very popular in Victorian times and appeared on decorative crockery, especially on lustreware produced in the northern potteries of Sunderland and Newcastle. It also had connections within masonic circles and collections from several masonic lodges contain jugs decorated with the inscription. The verse could also be found on watch and clock faces.

The 24 page chart is in a booklet format and has been printed in full colour throughout. All the motifs have been counted out for you within the graph, there is no tracing required. The chart comes with a comprehensive stitching guide and stitch diagrams together with historical information about the period the sampler was stitched in. You may enjoy watching a video about the sampler – see VIDEO tab above.

**PLEASE BE RESPECTFUL. The whole world has been affected by COVID-19. Circumstances continue to evolve and change. We sincerely regret delays to your deliveries, and feel your frustrations, but some things are out of our control. Not only will rude and threatening behaviour not expedite your delivery, it inflicts harm on others.

Please allow extra time for deliveries if you live in regional areas (I am sure you already know this!), at peak times and public holidays (such as Christmas) and during significant weather events and other natural disasters.
We will provide proof of shipping on request being a photograph with postage label. We will assist is tracking delayed and missing items.

Fabrics may not be returned unless of course it is our mistake.

Unless stated otherwise, all measurements for quilting fabric is in inches and yards (Imperial System) as traditionally used for quilting in the USA, and in the UK before the metric system was introduced.