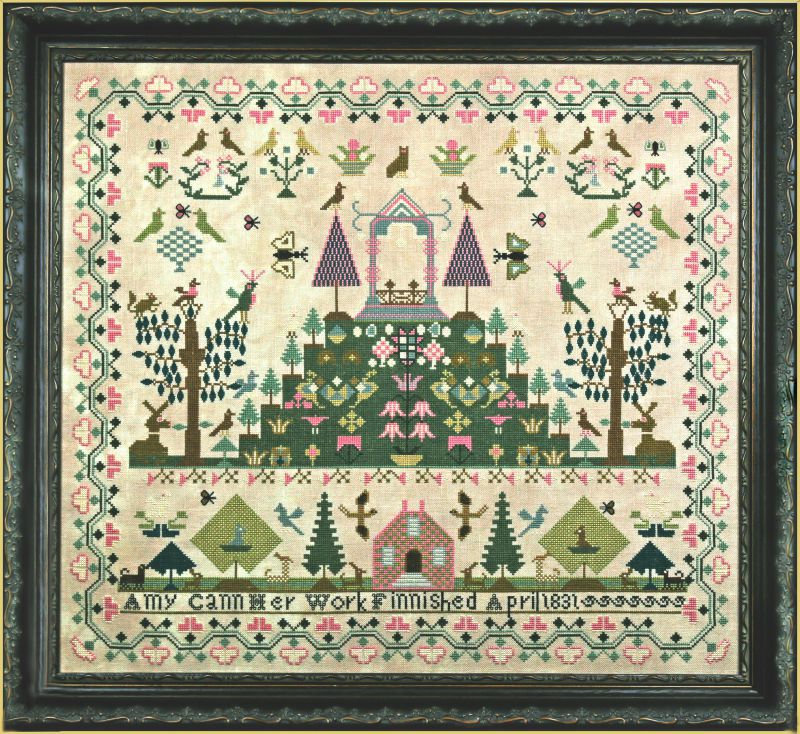 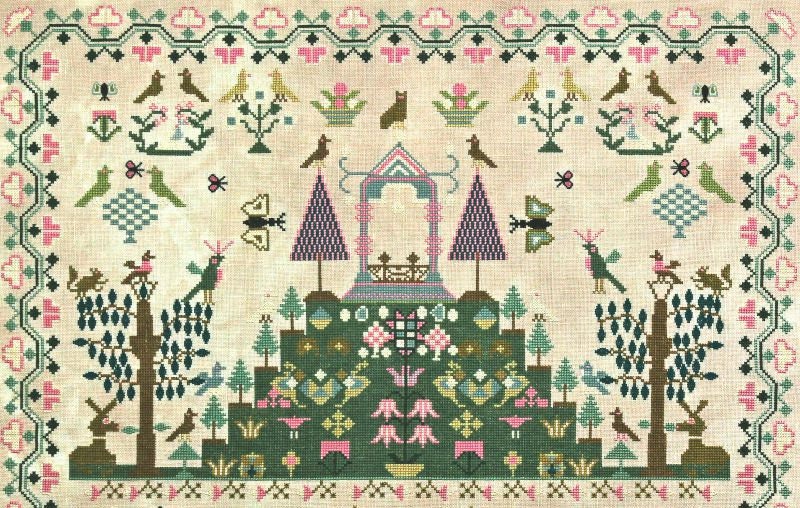 Amy’s delightful sampler depicts a wonderfully imaginative landscaped park with a velvet lawn, specimen fruit trees and shrubs together with a pinery flanking the terraces as they rise up to a classical temple. This young sampler maker has used her needle to create an ornamental pleasure ground so typical of the Georgian period. Wealthy landowners enclosed vast tracts of land to create huge landscaped parks, and those parks acted as a setting for grand houses. These country house estates were dotted with allegorical architectural elements such as grottoes, bridges, and follies. A folly is a building constructed primarily for decoration. 18th and 19th century English gardens often featured mock Roman temples, symbolising classical virtues, Chinese temples, Egyptian pyramids, ruined abbeys, or Tatar tents, to represent different continents or historical eras.

Amy filled her sampler with giraffes, deer, squirrels, dogs, hares and an aviary of birds including owls, parrots, doves and partridges in pear trees. Butterflies, moths and bees can be found no doubt attracted to Amy’s garden by the lilies, tulips and roses that bloom profusely. This charming, idyllic scene is contained within a stylised carnation border. In the Georgian era objects of fascination and wonder were brought back from the far flung corners of the growing British Empire. Aristocrats created their own private menageries with which to entertain their guests, and menageries could be found in the parklands of the great houses such as Goodwood, Stowe and Woburn.

George IV established a menagerie in the Great Park at Windsor Castle. The showpiece of his collection was a female Nubian giraffe, or ‘cameleopard’, as they were sometimes called. The giraffe was a diplomatic gift from the Pasha of Egypt and arrived in London on August 11, 1827, along with several cows that provided her with milk. She was the first giraffe ever seen in England.

Several Amy Canns can be found in historical records. It is possible that our Amy was born in 1821 and can be found in the 1841 census return working as a servant to Charlotte Magann, a lady of independent means lodging in Northampton Street, Bath.

The sampler is stitched in cross stitch over 1 and 2 threads, satin stitch, four sided stitch, double running stitch and Algerian eyelets. Amy’s sampler has been rated as suitable for all levels. Within Amy’s booklet is a comprehensive stitching guide which includes stitch diagrams.

Amy Cann has been brought to you in collaboration with Lisa Brown who has lovingly stitched the model. At the very core of Hands Across the Sea Samplers is a team of needleworkers who are passionate about antique samplers and being able to share those samplers with you.

**PLEASE BE RESPECTFUL. The whole world has been affected by COVID-19. Circumstances continue to evolve and change. We sincerely regret delays to your deliveries, and feel your frustrations, but some things are out of our control. Not only will rude and threatening behaviour not expedite your delivery, it inflicts harm on others.

Please allow extra time for deliveries if you live in regional areas (I am sure you already know this!), at peak times and public holidays (such as Christmas) and during significant weather events and other natural disasters.
We will provide proof of shipping on request being a photograph with postage label. We will assist is tracking delayed and missing items.

Fabrics may not be returned unless of course it is our mistake.

Thank you for efficient delivery of this beautiful chart. Hands Across the Seas reliably produce handsome and exciting charts.