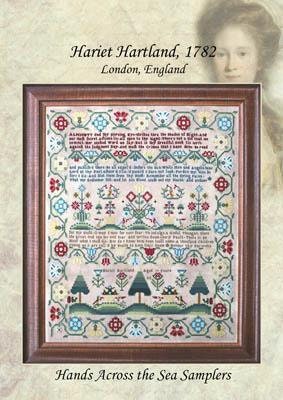 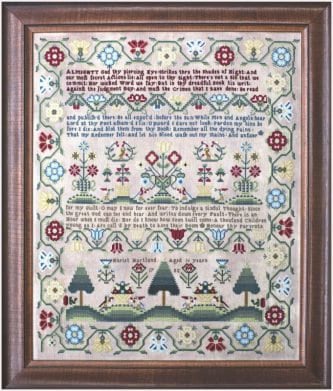 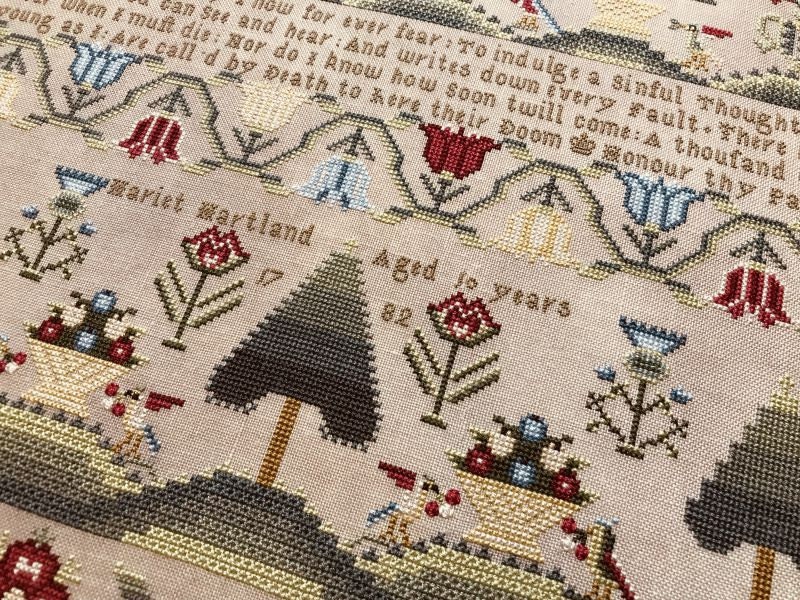 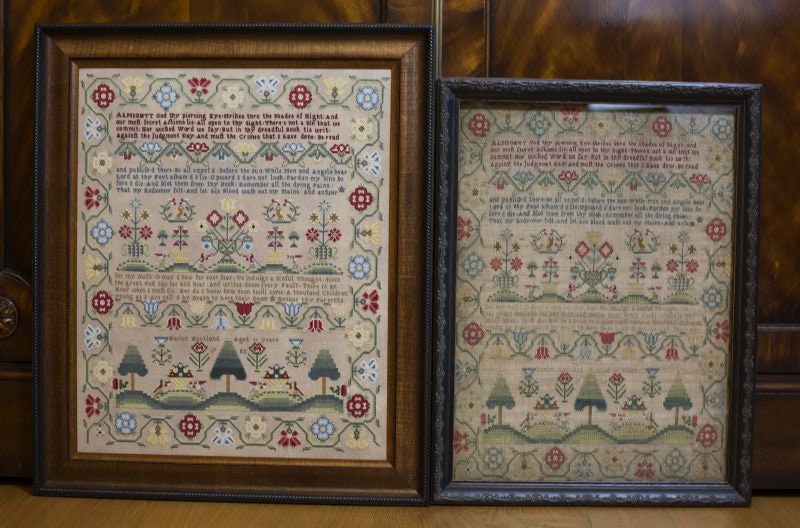 Once in a while a sampler comes along that makes your heart skip a beat or even two. Hariet’s striking and decorative sampler is one such sampler, she has created much excitement at Hands Across the Sea Samplers. No doubt working under the vigilant eye of her needlework teacher, Hariet created an exceptional, balanced and exactingly worked sampler with vibrant polychrome silks. They still glow jewel like some two hundred and thirty six years after the last stitch was laid. Hariet’s sampler is both beautiful and exuberant, and reflects many hours of patient discipline as she plied her needle. The stitches used are cross stitch over one and two threads, rice stitch, straight stitch, and a handful of double running stitches, all exquisitely executed on fine linen by Hariet at only ten years of age.

During the course of a girl’s education she would probably stitch at least one if not several samplers. Whilst diligently applying herself to the task, moral sentiments would be impressed on her young mind by the choice of verse. Stitching a sampler not only called for excellence with the needle but sought to improve the soul. Many verses embroidered on samplers came from the popular hymns of the day. Hariet chose to include verses from the hymn “Almighty God, Thy Piercing Eye” written in 1715 by Isaac Watts. Born in 1674, he is said to have shown remarkable precocity in childhood, beginning the study of Latin, in his fourth year, and writing respectable verses at the age of seven. His published hymns number more than eight hundred.

The verses have been divided into three sections by bands of pine trees perched on top of deliciously textured little hillocks, a collection of brightly coloured urns and vases filled with a profusion of gay flowers in full bloom, birds abound and two undulating vines, one heavily ladened with tulips and the other with carnations.

The sampler is contained within a bright border of mixed flowers that is reminiscent of the very popular Ann Tong Uffindell sampler that Hands Across the Sea Samplers released in the fall of 2017. We were not surprised to find that Hariet and Ann lived in London although several decades apart. Through family history records we know that Hariet the daughter of Willian Hartland, a carver, and Abigail nee Horseman, was baptised on Sunday, September 1772 at St Andrew Undershaft in the City of London.

Hariet’s sampler has been brought to you in collaboration with Lisa Brown who lovingly stitched the model and provided the NPI conversion. At the very core of Hands Across the Sea Samplers is a team of needleworkers who are passionate about antique samplers and being able to share those samplers with you.

Hands Across the Sea Samplers are on hand to help those stitching our charts. If you need assistance or have any questions we can be reached via email, address shown below, or the contact page on our website. Our website has stitching tutorials which can be found in the “sewing basket/tools” section.

Charted for AVAS silks or DMC. The design area is 285 stitches (w) x 332 stitches (h).
**Unless otherwise stated all fabric is sold in 1/2 yard increments. If you need a longer length, just order multiple units at checkout.
e.g. If you want 2 yards just select "4" in the quantity box.